The purpose of the organ renovation & updating project was to enhance the organ’s tonal resources, correct the pitch, and rebuild/upgrade the worn-out organ console.

At the September, 20th, 1916 Wake Forest Baptist Church business meeting a committee was formed to see about securing a pipe organ for the new church building.  The committee was chaired by Dr. H.M. Poteat and included church members R. L. Brewer and T.E. Holding. The next month, it was voted to start a movement to raise $5000.00 for the purchase of a pipe organ. The committee appointed other members of the church to secure subscriptions to cover the cost of the organ. Later that month, Dr. Poteat reported that with the exception of $26.00, the $5000.00 needed to purchase the organ had been secured in pledges.   A vote was taken and the committee was authorized to purchase an organ, the price not to exceed the amount authorized including $1000.00 to be paid by Wake Forest College. (1)

In April of 1917 the installation of the pipe organ was completed by Henry Pilcher’s Sons Organ Company of Louisville, Kentucky. The sequential number for the instrument was listed as Opus 930. It consisted of three manuals and 22 stops/ranks of pipes and electro-pneumatic action. (2)

Since its installation there have been several small modifications to the pipe organ. (3) 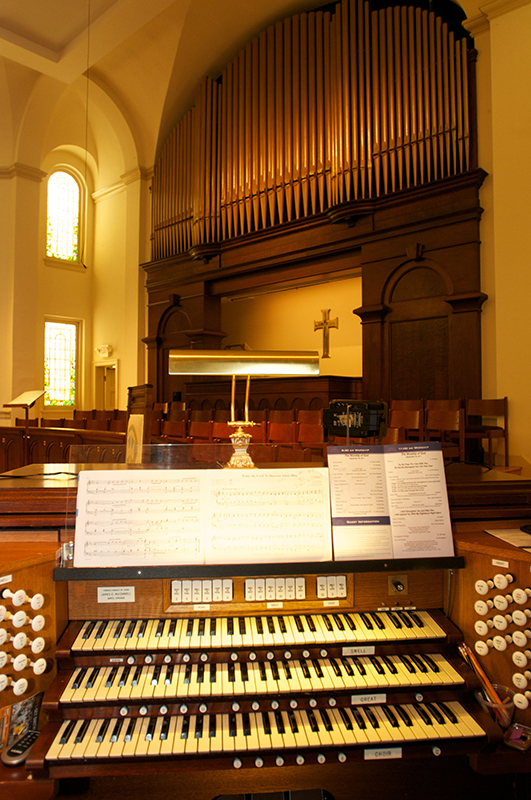 In August of 2014, Bryant Moxley joined Wake Forest Baptist Church as Music Minister. Bryant, working with a newly formed Music Instrument Team chaired by Jay Davis, the four bid replies were evaluated and two were selected for updated responses.  After a careful review and site visits, a contract was awarded to John Dower of Lincoln Pipe Organs located in Lincolnton, North Carolina. The renovation work began in the Fall of 2015 with the removal of the organ pipes and the console.

To enhance the organ’s tonal resources, some existing pipes were re-conditioned and others were replaced with pipes from the decommissioned Austin Opus 2381 pipe organ at First Baptist Church of Clarendon, Arlington, Virginia,(4).  Additional digitally recorded pipe organ voices from the Walker Technical Company were installed including a Festival Fanfare Trumpet.  A new silent blower was installed in the pipe loft to provide additional wind for the pipes.

That which was once worn out is now renewed and ready to lead musical praises to God.

1 Praise ye the Lord. Praise God in his sanctuary: praise him in the firmament of his power.

2 Praise him for his mighty acts: praise him according to his excellent greatness.

6 Let every thing that hath breath praise the Lord. Praise ye the Lord.