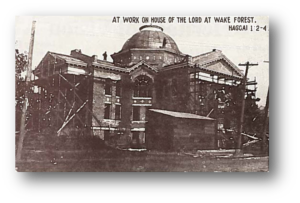 In the year 1834, North Carolina Baptists established Wake Forest Institute to provide young men with agricultural training along with sound religious instruction. The Institute was built on 610 acres of land purchased from Dr. Calvin Jones, area physician and planter. A few years later, the school became Wake Forest College. Early students and faculty of the small school often walked or rode horseback through the forest to worship at Wake Union Church which was some distance west of the college. In 1835, a small group of students returning from a revival in Granville County, with much religious fervor, passed a resolution asking that a Baptist Church be established on the campus. In August of 1835, Wake Forest Baptist Church was established according to the minutes recorded by the first church conference. Reverend Samuel Wait, President of the Institute, was called as the first pastor.

The early congregation, largely made up of students, faculty and a few enslaved servants, worshiped in several campus buildings during those initial years. The first worship space was said to be the carriage house near the President’s home. A committee was formed to see that the dirt floor was swept and wood benches moved into place for service. Baptism was conducted in a stream near the northern edge of the campus. Students and faculty, dressed in black robes processed across the campus to the designated pond, were baptized by Pastor Wait, and were “extended the right hand of Christian Fellowship,” according to early minutes.

The church worshiped in a variety of available buildings on campus. Perhaps the “Little Chapel” in the Main Building, later after the Civil War named Wingate Hall ,was the primary worship space. During the Civil War the college ceased exercises for the duration and the campus buildings were requisitioned by the government to be used as a hospital for the injured coming off the Virginia battle fields. Wake Forest Baptists then worshiped in the African Chapel, a building on North Avenue across the street from the campus. 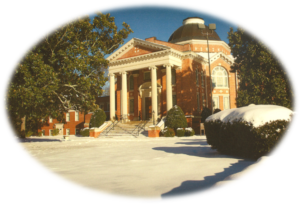 In the few decades following the war, the small village of ‘Wake Forest College’ began to grow along with the college. Many townspeople and businesses served the growing college. College presidents had routinely been named pastors of the church until the late 1880’s when that practice was changed. At that same time townspeople were welcomed as members of the church. Former enslaved families who had worshiped in the African Chapel under the care of Wake Forest Baptist Church now established Olive Branch Baptist Church which has continued through the years. This was a seeded church of Wake Forest Baptist Church.

As the town of Wake Forest and the college grew, space for worship soon became crowded. The local church, the college board of trustees, and many North Carolina Baptists were concerned that worship space for a growing congregation was inadequate, particularly for the increasing number of students. Dr. Walter N. Johnson was called as pastor in 1909. He, along with members of the church, at once spearheaded a move to get a resolution passed by the North Carolina Baptist Convention to build a church on the campus of the college. He also sought the support of Baptist Associations across the State in fund raising strategies.

The deciding resolution was passed by the Convention. The North Carolina Baptist Convention along with trustees of the college offered and set aside land on the southeastern corner of the campus for a church building to be erected. Fundraising began, an architect was selected, and ground was broken for the church building in 1913, almost 80 years after the founding of the church. Fund raising continued and was frustratingly slow at times. The Pastor and the church despaired at times that enough funds could be provided to complete the church. But soon the stately building grew with its warm brick walls going up, the roof was put on, and the characteristic dome was placed. The inscription, “The House of the Lord,” was carved over the large front doors, followed by the installation of the lovely stained glass windows, just in time for the meeting of the North Carolina Baptist Convention in December of 1914. The church was accepted by the congregation in February 1915. The first worship service was celebrated on February 7, 1915.

During the ensuing years, the church grew in membership and ministry, a congregation steeped in its association with young people, with individuals and families called to be missionaries both locally and internationally. Missionaries on home leave and studying at Southeastern Baptist Theological Seminary, often worshiped at the local church. Much earlier, Matthew Yates and his wife, Eliza Moring Yates set out on a mission to Central China in 1840 to serve there for forty years. Miss Sophie Lanneau served as a teacher in China who returned to Wake Forest after the outbreak of the second World War.

A fellowship hall and office complex was added to the main building in 1953 and a two story education building was constructed in 1970. In the 1980’s a commitment was made to renovate the historic sanctuary. Begun in 1987, that renovation proceeded in several stages and was completed in 1994.

Wake Forest Baptist Church has benefited by the bequeath of two acres across the street from the church by Peggy and Gordon Welsh. The church then purchased the historic Purefoy–Swett house directly in front of the donated property. The house has been remodeled for administrative offices. Part of the two acres has been developed, as a new ministry serving the community, The Community Connection Garden. Food grown in the garden is donated to area food kitchens and the Interfaith Food Shuttle that serves those in need from the community and in the greater area. W. Cecyl and Irene Stephenson, long time church members, provided 16 acres along Wake Union Church Road. Their generosity has allowed the church to build a pavilion and athletic field used for fellowship and community outreach and continues to offer opportunities for future growth.

Most recently the church has completed construction of a much needed additional education building and Fellowship Hall, along with additional paved parking. The former Fellowship Hall has become the Youth Center. The new building houses a large Fellowship Hall and many classrooms used by the church and by the community. The Trustees of Southeastern Baptist Theological Seminary graciously and generously allowed the church to purchase the land needed for construction. Growth in church membership mirroring community growth and the increase in ministry to the community does daily remind us, even after almost one hundred eighty years in this place, of God’s grace in allowing us to serve his purpose of reaching beyond our walls. Glory Be To God!